the biggest national newspaper in finland, helsingin sanomat, has published a series of ten editorial articles about design in everyday life owing to the recent helsinki design week, and the last one came out late last week.

written by simo heikkilä, the professor of furniture design at aalto university, it problematizes the loss of the normative idea that every created object should improve the functionality of the one, or preferably a few (i.e. several objects), that preceded it.

the ethics of design have hardly ever been articulated as directly as this as he condemns cheap copies, variations and design for design's sake. design is essentially about improvement, an idea i have talked about here before, but instead of using industrial improvements to create objects that do the tasks we need more efficiently by doing them better or requiring less objects for multiple tasks, we are bombarded by objects for every imaginable moment and action.

moreover, collecting these needless things has become something of a status symbol. as he states, the irony is that our status is based on who can accumulate the largest heap of crap.

sadly, he is so right it hurts.

his point is not that design is worthless or that new objects are not needed. well, it might be that they're not needed per se, but that there is room for new design in this world – as long as we're responsible about it.

in a world where trying to live according to a credo, that both celebrates innovation and design but remains critical of needless accumulation of things, is increasingly difficult, it soothes the mind to find entrepreneurs and people who do their best to do the same.

a webstore i found a while back tries following the tenets professor heikkilä is raising. matteria shop sells items that have multiple uses or an extended usability, that cleverly combine items we've learned to conceive as separate, and they use sustainable materials and processes as much as possible.

founded by a finn and a brooklynite, based in barcelona, they seek items that fulfill the criteria they believe in, and their collection of goods is quite remarkable.

one of the latest that inspired me because of our last weekend's party debacle, is this wooden cutting board/hors d'œuvre plate that can be combined with others for a larger chopping surface or used to hold a set of appetizers and a wine glass. it is a cute idea of combining two uses unexpectedly. 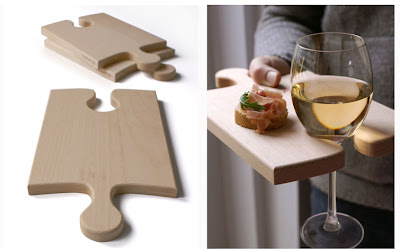 nevertheless, i wouldn't be myself without hesitations: i am not sure if i know of anyone who would like or had the room for storing several of these – assuming cocktail parties are often held when there are such multiple attendees that a sit-down dinner would be uncomfortable – or, additionally, who would need many of them for chopping. somehow, i still think the idea is rather clever and whimsical.

another iffiness goes towards using a surface with visible cuts (which happens to cutting boards as we all know) as a serving place, but it could also be considered having a rustic feel to it. dunno.

in any case, there are other useful things that actually work without hesitation, so go on and check it out.
Lähettänyt stellagee klo 6:19 PM