the duel for the children.

the extremely binary world of fairytales is replicated in american mainstream politics between the liberals and the conservatives. political alliances are more pronounced across the atlantic and while, obviously, the realistic monochrome picture of american politics does have shades of grey, political speech is almost exclusively black and white.

hence, what would be a greater environment for overly simplified political argumentation than stories directed at little kids. a while back i stumbled across a series of children's books for parents who wanted their children indoctrinated as early as possible to the realities of the political world. 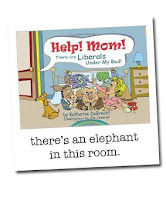 one of the more impressive examples was help! mom! there are liberals under my bed with the following synopsis:

This full-color illustrated book is a fun way for parents to teach young children the valuable lessons of conservatism. Written in simple text, readers can follow along with Tommy and Lou as they open a lemonade stand to earn money for a swing set. But when liberals start demanding that Tommy and Lou pay half their money in taxes, take down their picture of Jesus, and serve broccoli with every glass of lemonade, the young brothers experience the downside to living in Liberaland.

brings to life the core values of the Democratic party in ways that young children will easily understand and thoroughly enjoy. Using plain and non-judgmental language, along with warm and whimsical illustrations, this colorful 28-page paperback depicts the Democratic principles of fairness, tolerance, peace, equality, and concern for the well-being of others. The book can also serve as kid-friendly introduction to important social and political issues. It's a great way for parents to gently communicate their commitment to Democratic principles while helping children begin to make sense of the complex world around them. A portion of the book's profits will be donated to Democratic candidates and party organizations. 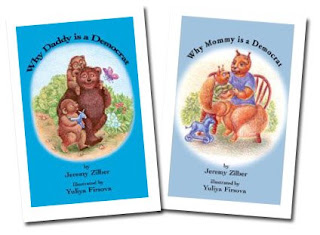 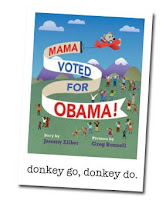 and my personal favorite, mama voted for obama!, directed at babies and toddlers claiming that

This colorful book of rhythm and rhyme is a fun and playful way for parents to let their kids know how they voted in 2008!

and isn't that such a happy way to spend one-on-one time with your little baby?

in the conservative camp it is crucial to raise fear of taxes early on. democrats, on the other hand, instead of talking about jesus, try to convince they are him. unfortunately, sometimes it seems the level of argumentation the adult population portrays has not developed significantly from the caricatures pictured in these books. in case these are not enough, a sarcastic new york times article explores the penetration of socialist ideals in children's stories.

which side of the sandbox do you play in?
Lähettänyt stellagee klo 7:03 AM