unlike many of my fellow urbanites i do not desire a lot of green around me. for me, the urban landscape is not a compromise of having everything but the nature around me. it is exactly what i like and i do not entertain any wishes of moving closer to lush forests or flowing meadows. i'm just dandy with a few parks close by.

in nyc, i could see the value of central park as the lungs of manhattan and marvel at the silence within the trees, but i felt it was too big to feel like a proper park. parks, to me, are essentially urban islands of green and central park was an australia of an island that could only be distinguished from a continent by looking up at the vertical aspirations of nyc architects.

when i seek nature, i do not wish to forget the urban – the opposite of what i often hear other people say. i deal with staying at the cottage for a while, but detaching myself from the city does not feel like enclosing my being in a sanctuary. my favorite parks are surrounded by concrete, streets and people who do not even intend to visit the park. being part of the hustle and bustle is what creates the bubble of tranquility i need when taking my brief moment on a bench or in the middle of grassy areas.

to me, the essence of urban greenery is in the relationship with people living in a city. naturally occurring fields or woods can wow me once, but it is the coexistence of active limitations that apply to all living beings sharing urban space that appeals to me most. thus, i find great beauty in both perfectly tended flowerbeds and a brave little weed trying to make it through a crack in the asphalt.

although i don't need to see more green around me, the thoroughly urban phenomenon of guerilla gardening appeals to me. the term was coined in nyc in the 70's to describe taking action in derelict spaces and turning them into gardens of decorative or edible plants, but there have been notable guerilla gardeners since the 1600's onwards. 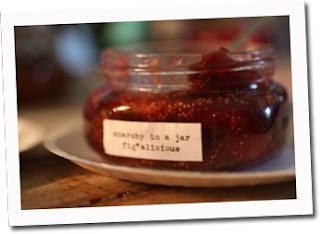 urban gardening efforts are enjoying growth (haha!) everywhere and the fruits of rooftop labor increasingly end up in the bellies of ecological proximity preferring consumers (like these anarchy in a jar preserves from brooklyn), but the notion of guerilla gardens is based on taking over public or neglected private areas and utilizing them to beautify or provide nutrition.

the guerilla gardening site linked above lists pics of projects all over the world from minimal to stupendously ambitious. they also provide instructions for revolutionary action of yer own, such as making your own seed bombs, i.e. little cocktails of seeds and fertilizer that can be tossed to places you'd like to see vegetation taking over but where you cannot work the soil for some reason or another. 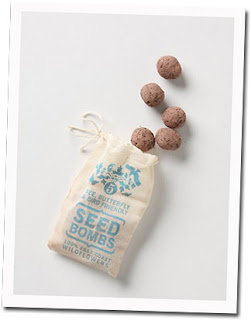 there are also readymade bombs available, for example here, but i'd suggest using locally typical vegetation – unless your imagined reality is a fantasy garden which, of course, is great as well.

thus, spreading your seed just got a significance a tiny bit less evolutionary and just a tad more revolutionary. do you have a spot in mind you'd like to see blooming?