when i found the chewed up beads at our cottage i was silently happy that none of the mouse traps at the cottage had been activated for winter. one year i found two mice drowned inside a vegetable oil bottle – they had chewed the cap off and fallen in to a delicious detriment of the final kind – and i felt sadness.

i have always liked rodents. i had two gerbils when i was little and i loved them dearly until i accidentally killed them by feeding a last supper of lingonberries. i guess they were too acidic for their little stomachs...

in general, rats or mice do not give me the chills. for example, in williamsburg our apartment front was to the street and in the summer we kept it open at times. sometimes the odd rat would wander in, but even then they didn't really bother me although i knew they were disgustingly dirty.

nonetheless, the other nyc pest, cockroach, did really bug the hell out of me.

i find mice and rats cute, curious creatures that make great pets and hardly troublesome pests. that is, i probably would not like subway rats in my apartment if it was my permanent location nor do i want mice running around the cottage when i'm there, but i don't think providing a few mice a safe winter nook to rest in is such a terrible thing.

people in nyc and other metropolitan areas with subways are used to seeing gigantic rats while they wait for transportation. rodents just coexist in the city and people hardly pay attention to them. they're accepted as one of the natural downsides of condensed urban habitation.

therefore i was surprised when last fall i read in the gothamist about an incident that took place in the upper west side: a reader had spotted a brown mass while walking and texting and just as he was about to jump over a "dog poo", he realized it was a big rat stuck in a crack in the sidewalk. 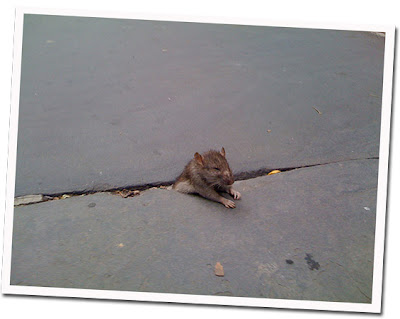 after another examination the rat proved to have perished in his attempt to squeeze through the street. he sent the photo to the magazine and the rest is internet history: people reacted instantly.

the rat received several homages in photoshop form and although he probably wasn't removed humanely, the effort put into these pictures here tells plenty about how new yorkers relate to their rodent population: in addition to annoyance, there is also warmth, humor, affection and acceptance as cohabitants.

pics from all over the interweb, claim yer own, if you wish. click to enlarge.

in a poll, 42% of new yorkers claimed they'd help a rat facing similar troubles. how enchanting and, quite honestly, probably wishful thinking, but still a charming idea. what would you do?
Lähettänyt stellagee klo 5:49 PM