it is not surprising that after a few years of bacon playing the role of the obligatory side dish from burgers to ice cream, new yorkers are embracing a new food trend: veggie love.

don't get me wrong, the rather recently found fondness for artisan butchers and locavore preferences for organic meat from distinguishable farms is all but disappearing from trendy restaurants – far from it. also finally, the interest in the background of one's protein is showing some signs of venturing towards finland, as well. perhaps we'll get proper artisan burgers served next summer somewhere...

as a (pesco-)vegetarian, i greet the growing appreciation of vegetables with joy. vegivores – as dubbed by a new york magazine article – are not a group that avoids meat or is against meat consumption, but they appreciate vegetables as the main, most powerful element of a meal. combined with the ever increasing trendiness of supporting seasonal and local produce, it is a healthy development towards more sustainable eating.

for finns, who also tend to overemphasize the role of the slab of meat on their plate, this direction seems more than recommendable. unfortunately, the discussion here seems to focus on the impossibility of feeding people with organic food which conveniently ignores the fact that sustainable eating means a thorough change in the content of our plates, especially a reduction of animal protein and a reintroduction of local veggies.

new yorkers base the increased interest in vegetables on the popularity of farmers' markets: after being able to fondle produce that's been picked ripe and with more variety, the ability to explore flavors has taken a leap forward. i cannot but agree with the fact that the more one partakes in growing one's own food, the more important it becomes: urban gardens are a reality – albeit a privileged one – also here in finland for those who do not have a countryside garden at their disposal.

because food should not be boring and bland and although meat is easier to prepare properly, i feel ecstatic to hear that more chefs are taking the challenge of the veggie seriously and want to prepare great food where the clichés of foie gras or tenderloin play only the role they should be appointed: boring and self-evident. i am not claiming they're not tasty (not that i'd know) but just saying that there's more to food than a juicy steak or a bite of extravagance based on animal torture.

the introduction of fine-dining menus comprised of veggie courses warms my heart, and also i cannot help but feel a little nudge of self-gratification going towards those finnish chefs who keep on ignoring vegetarians by claiming that proper food contains animal protein. b***slap. 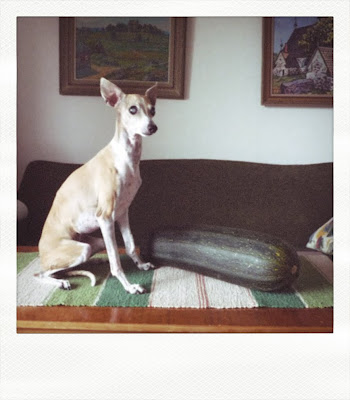 when they grow out of hand and turn inedible, zucchinis make great accessories for portraits, too.

even if it was a fad, i want to appreciate it to the fullest. another trend will emerge, but based on these recent developments, i hope the direction stays towards more sustainable and less cruel.

do you consider a meal without meat less festive or worthy of fine-dining prices?
Lähettänyt stellagee klo 10:31 AM