well i need you to tell me what to wear.

sometimes pictures can suck you into a world that you cannot relate to or really understand. sugar kane mentioned how sometimes a fashion editorial apprehended in a susceptible state of mind can lead astray in clothing stores, and i can totally relate. although i'm not claiming sugar kane feels the same, i have always built my looks as imaginary pictures, little events to be captured in film, and it isn't all that hard for me to stage a shoot where the character i am playing is rather far from my daily imagery.

although playing creative, self-displacing dress-up is fun and i never intend to give it up, it can also get out of hand. when everything seems fine leaving the door but the street slaps you in the face and exposes the reality clash between you and yer surroundings, the subsequent posture you feel proper to assume is close to pathetic. needless to say, impersonation based on aesthetic whims can also be expensive. that is reason enough to avoid going all alice in wonderland too often.

sometimes i feel insulated from pictorial influence. as ranna said in the comments section of sk's blog, her admiration of innumerable styles never sets foot in her own wardrobe. her own style is solidly her own but that does not prevent her from enjoying other looks. how true an observation.

thus, i wanted to present a perfect example from my life. devendra banhart has been a sidetrack of a sort in my musical taste. i am not generally into psych folk or the sort, but he hit a chord with his single "i feel just like child".

when i stumbled across a book of photographs by lauren dukoff with a foreword by davendra, i looked closer. miss dukoff turned out to be a young hotshot photographer who has shot most of current huge names in music. her book family is a collection of a close circle of friends, including natasha khan of bat for lashes (below) and joanna newsom, and the pictures of this new generation of american nufolk musicians are impressively and, at times, breathtakingly beautiful. 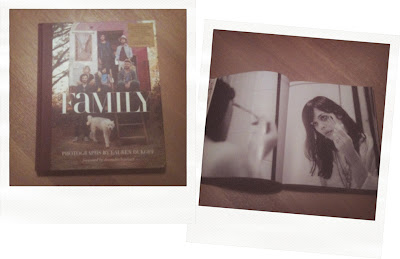 although i'd probably describe her objects' style "too hippy" to my taste, the pics offer a perfect getaway to a world of americana because they so completely challenge my preferred visual stimulants. although i find familiar urban scenery in many of the pics, the stylistic whole feels distant and seductively strange.

have you immersed yourself to a visual wonderland lately? where do you prefer to get lost?
Lähettänyt stellagee klo 2:58 PM