last wednesday night we enjoyed a meal at hel yes. we had booked the much coveted seats early, but felt fortunate to have a very unexpected additional reason to celebrate.

more about that later, my dears.

the pop-up restaurant itself was located in an old warehouse at the outskirts of town – there was a handpainted sign guiding the way, but from the outside only a string of lights revealed that something out of the ordinary was going on. as an urbanite with a partiality towards rough and rugged surroundings, i instantly loved the location.

the large dimly lit room was decorated with assorted furniture from finnish designers and everyone was seated at communal tables. the tableware was also mismatched creating a homely bohemian feel. klaus haapaniemi's amazing folklore-inspired blankets hovered tent-like over some tables, ours had an arch of birch creating our own micro-sanctuary of repast.


the atmosphere was excited and expectations were high. perhaps a little too up there as the porcini mushrooms in my lasagna proved. the food was tasty, but not spectacular. nevertheless, the location and the buzz compensated nicely, and ultimately i found myself returning to my thoughts about guerilla stores and the impulses they create.

luckily, the champagne, organic beer from lapin kulta and the dessert wine were exactly what i needed, and we left very satisfied. 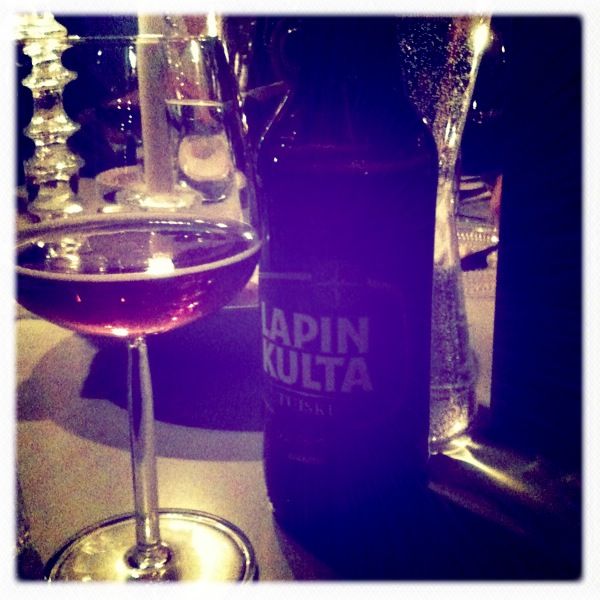 the reason we rushed out soon after finishing the dessert were tickets to see the hurts. we made it to the club exactly when the guys stepped on stage. i could not have been surprised more pleasantly when i heard my favorite kylie song cover.

a hel of a good night.
Lähettänyt stellagee klo 12:21 PM

Not very surprisingly at all, I forgot to book a table despite my first over-enthusiastic reactions to the news Hel Yes was coming home. Seems like I missed another nice night out.

Great to see they use Ultima Thule glasses - My mum collects them, and I love the festive feeling they create. She doesn't have the champagne flutes yet though, so there's a good idea for presents for her (with a bottle of bubbly of course)... Cheers!

sugar kane, you weren't the only one. i've heard numerous laments over not acting fast enough.

i also love ultima thule. they're just a perfect mixture of rugged and sleek.