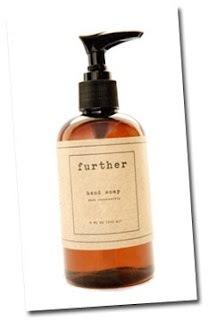 imaginative people never fail to amaze me. i find myself regularly in awe with the fact that someone came up with radio waves and the microchip. i've never bought the anachronistic crap that an airplane was something which became a reality out of inevitable necessity because humans have a general desire to fly since, obviously, we don't. we actually tend to fear flying more often than not. but isn't it amazing that some people did have an urge to conquer the skies, which enables us to hop on a plane and actualize the idea of flying around the globe?

minor inventions have me equally delirious at times. for example further, a luxury hand soap made out of used restaurant grease. i kid you not: the oil used to fry french fries and calamari can be reused for biodiesel (through extracting glycerin and adding potassium hydroxide and methanol) and soap (the remaining glycerin plus some essential oils). the makers actually create a sustainable circle by taking bottles of the soap back to the restaurants that provided their oil.

This and re-cycled plastic bags may lengthen our time on this planet.

maybe... but let the sarcasm slide and quite honestly i'm just bedazzled by what people come up with.

like we really need more time on the planet...

View my complete profile
comments and discussion are more than welcome, in english ja saa vapaasti kirjoittaa myös SUOMEKSI. now, let thyself be heard!
email me at stellageezer(at)gmail.com.
click on photos to see them larger if you wish.